Workflow Variables are used to store values within a workflow process

Variables are used to store data which can then be used within the workflow for decision-making, informational display, or use within a script.  Variables by nature are changeable, and are a core concept of all programming languages, and “code-less” configuration.

Throughout the lifecycle of a workflow, the values stored in the variable can be set, modified, queried, and used in scripts and other workflow objects.

Workflow variables are available in the following data types:

To create a variable, ensure that the Variables dockable panel is displayed.  This is located on the right of the workflow designer.  This panel can be “pinned” to stay open and visible. 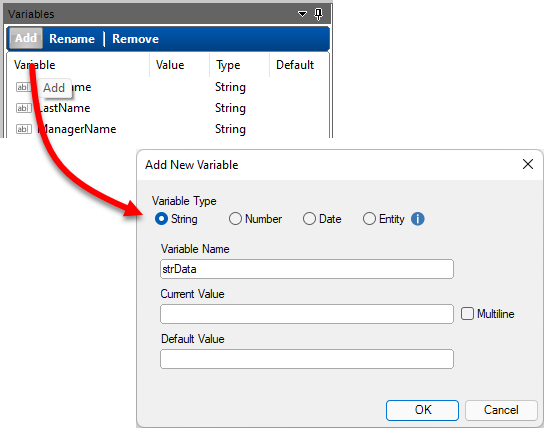 Once a variable has been created, it can be renamed, or deleted.  Use the options on the dockable variables panel to perform these functions.

Once a variable has been created, you can assign a value to it by a number of different ways, including:

Set a variable based on user input

Database scripting with SQL that include variables

Branch workflow based on the value of a variable