The HelpMaster WebAPI provides a developer interface to database and key HelpMaster functions. It can be used to integrate HelpMaster with other systems and processes. 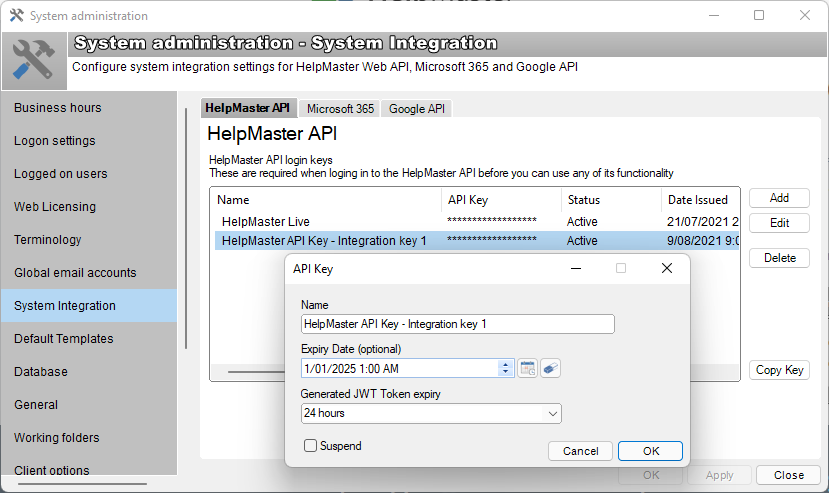 Name: A general name for the key. Can be anything - usually a descriptive name that indicates its purpose.

Expiry Date: Optional. If a date is provided, the key will stop working at that time. If this is left blank, the key will work indefinitely.

Generated JWT Token Expiry. Required. Default expiry is 24 hours which is recommended. The other option is “Never Expires”. This expiry refers to the Bearer token that is generated by the User API endpoint using this API key.

Suspend: If checked, the key will be suspended and not work. Useful for quickly and temporarily suspending/revoking the ability to create a bearer token via the User API endpoint.

Suspending or deleting an API Key!

Suspending, or deleting an API key does not prevent access to the webAPI if a user/system already has a valid bearer token that was generated using this API key - it will only prevent further issuing of bearer tokens since the suspension.

In order to prevent access to the web api for an existing bearer token, you will need to update the API secret that is found in the websettings.json file on the webserver.